COVID-19 is a white swan 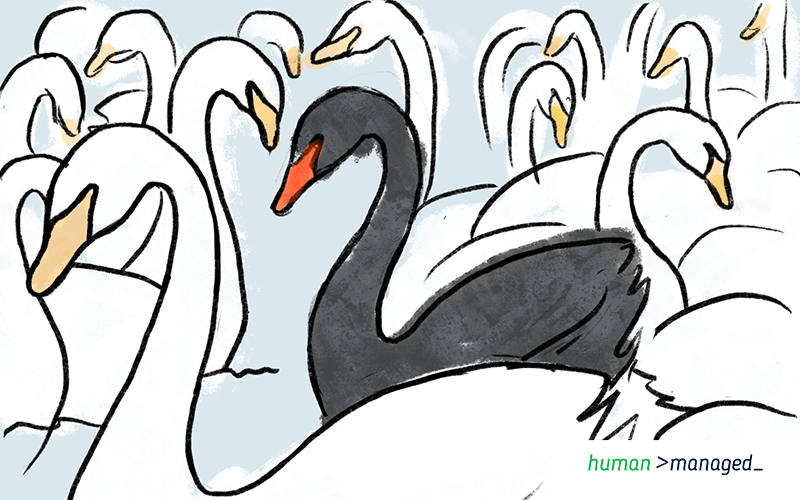 We are facing the worst epidemic of our times. The scale of COVID-19 has left the global economy paralyzed and has even caused several countries to go on a second lockdown following the renewed increase in infection numbers. But it's difficult to focus on the downturn when the worst effect of this pandemic is wiping out a significant portion of a country's population.

Some leaders would say that no one saw this coming. But you see, not seeing a threat is wildly different from downplaying it. It's painful to look back at the poor decisions, or the lack thereof, made at the onset, which could have prevented the virus to spread too far.

We have also watched how cognitive biases of our leaders crept in, believing their country is less exposed than it is and that drastic early action was unnecessary. The inability to overcome these biases inevitably brought us to the helpless state we are in now.

Instead of politicizing, however, I believe we can come out of this crisis stronger by drawing lessons from a risk perspective. Many people talk about risk but fail at some point in practice, especially in assessing them. Disruptive risks such as COVID-19 present unique complexities; accounting for likelihood and impact alone is not enough to capture these unconventional risks, and by resorting to this approach, we are bound to choosing the incorrect risk response. In this blog, I want to talk about how we could have prepared ourselves better had we added velocity, and not just likelihood and impact, to the risk equation.

An animal kingdom of disruptive risks

Disruptive risks are risks that could potentially cause a major impact on a company’s profitability, competitive position, or reputation (Lam, 2019). A popular example would be how a tweet of a CEO with a large following could trigger negative news headlines and regulatory actions. When we talk about such risk scenarios, we often refer to the animal kingdom of disruptive risks (Figure 1).
‍

Inspired by this framework, I went ahead and evaluated COVID-19 as a disruptive risk. Instead of just looking at its likelihood and impact, I also took velocity into consideration in order to validate prevailing claims that COVID-19 is a Black Swan.

Evaluating COVID-19 as a disruptive risk

Then there's the illusion of control due to a sense of optimism. Believing that the virus is just like the common flu that's much less lethal and one that will "die" during the summer. Optimism bias hindered us from capturing the most reasonable worst case, which is a key point in risk management.

Identifying the virus as a high impact risk could have focused early efforts on mitigating and not containment. The risk could have been transferred to airlines in January to stop the spread. We delayed losses only to be at a point where we're losing even more. While containment causes early disruption, it is still guaranteed to net out the least amount of disruption in the end.

Given that the likelihood of the COVID-19 risk event is high disqualifies "the spread of a virus" from being a Black Swan. It is also not a Grey Rhino because this isn't the type of virus that chooses who to attack -- it is a risk that is definitely going to hit everyone given its fast transmission. COVID-19 is therefore a white swan: an event that's bound to happen (high certainty); it's just a matter of when.

Aside from looking back to where we went wrong, we also need to pay heed to what has been done right: the commitment to early containment by imposing cordon sanitaire and doing intensive contact tracing.

We also need to remember those who heavily pushed for a shift from containment to mitigation when the epidemic had hit a tipping point: that is when more people couldn't be linked to known cases and contact tracing seemed to have not scaled appropriately. Mitigation strategies such as school closings, mass testing, event cancellations, and other social distancing measures have delayed the peak of infections.

However, simply remembering won’t let us beat this pandemic. We can’t simply decide to reopen with too few precautions, without continuously refining standards for contact tracing and testing. The pandemic is far from over though many people refuse to admit it. It is likely to get worse depending on how we act.

As the world is ensconced in the new normal, we hope for people to stand out and see opportunities for growth. And as for organizations, COVID-19 is a proof that we live in an increasingly volatile environment and that boards should reassess their current assessment of risks. Considering risk velocity puts us in a better position to prepare and respond to disruptive risks.